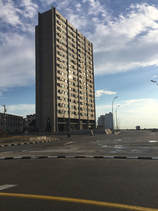 Status: Currently in Pre-Production
The documentary "Girón" is an intimate look into Antonio Quintana and Alberto Rodriguez' 1967 experimental high-rise building known as the Girón building in the city of Havana. Marked by its brutalist appearance, monumental sculptural expression, and ingenious slip-mold prefabricated system, the seventeen-story decayed project epitomizes Fidel Castro’s 1959 speech at the Colegio de Arquitectos de la Habana regarding social housing and the right to work and dwell in the city. Located in the privileged Malecón waterfront, the building constitutes a critique to the aristocratic neighborhood of Vedado while providing first-hand accounts from the original residents that labored in the nearby Claudio Arguelles Girón bus factory and the successive generations that, for decades, have been caught between the discursive construction of a socialist dream and the menace of demolition.